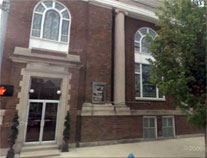 It’s funny, I was raised in church as a young child, First Christian Church of Peru, Indiana. All my life I assumed it was a Presbyterian church. Nothin’ against Presbyterians, I thought I was one most of my life.

I have always believed God gave us His wisdom in the Scriptures and that they were the source of all the wisdom I needed to navigate this life.

I have always believed (and don’t get mad at me here, I’m not saying that I am right and everyone else is wrong) that denominations did more to separate people than to unite them in God’s kingdom. I am definitely a “kingdom” thinker….we are all, regardless of denomination on the same mission of the restoration of this world. I always thought it odd that Christians so often thought that salvation started when we die and go to heaven…and never realized that Jesus taught that the kingdom was already right here among us.

I have never felt a particular pull of any denomination and instead just preferred to be considered a Christian.

I always though that the creeds that were read in church were “in the Bible”, as in a part of the Bible. In my ignorance I just didn’t know. As I studied creeds, I felt that they were a way of saying, “Okay…this is what we believe…if you want to be with us, you need to believe that too”.

I never understood that baptism could be anything other than a believer’s baptism through full immersion, as Jesus was immersed.

I never felt very religious (and still don’t)……but I always loved God and felt passionately for Jesus…..and I knew as I came out of my addictions as a young man and returned to my roots…..that God’s intention for us was more than to punch our Salvation ticket….He wanted us to have a passport that we held dear that helped us gain entrance and showed where we had been……and yes, in the end…..we would enjoy an eternity with the Father.

I felt called to ministry in April of 2003 and was ordained in Jan of 2007. Because we are “non-denominational”, we don’t speak much in denominational terms. I had no idea that as a church we had these deep seated beliefs……however, I knew that what we believed, I had believed from the beginning as I simply studied Scripture on my own.

I discovered last year that The Christian, non-denominational church was actually born in the 1800’s and was called early on the Stone-Campbell movement or the Restoration movement. Very interesting….. 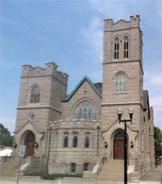 The Presbyterian church was across the street

I then discovered that I was never raised in the Presbyterian church as a young child (until I was 8 or 9), but that I had been raised in a non-denominational Christian church from the beginning (the First Presbyterian Church in Peru Indiana was nearby…somehow I just assumed I was Presbyterian….).

So, here are the basics of what I discovered as I studied Scripture on my own and as I simply sought to follow Christ in life……and found to be the tenants of  being simply “Christian”.

This is what I believe:

These are the tenants of the Stone-Campbell movement, otherwise know as the Restoration movement.

2. “In essentials unity, in opinions liberty, and in all things love”

3. “No head-quarters but heaven, no creed but Christ, no book but the Bible, no plea but the gospel, and no name but the divine.”

So….there you have it. This is basically what I believe. If you believe different….that’s okay with with me. Hopefully we are all doing our best to love like God loves, live like Jesus lived and to walk as close in His footsteps as possible. I hope you believe too……better yet…I pray that you learn to follow. Jesus never stood still……he walked…..join me……. let’s follow the Rabi Jesus.