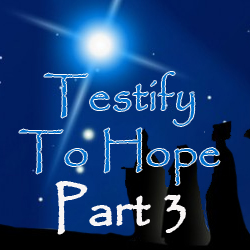 The third way that we are a part of this story of the Magi is that just like the testimony of the Magi about the birth of Jesus, the king, we can testify to the hope we have in Christ. With the birth of Jesus, His life and with His death on the cross, the veil that separated man from God was torn! What does that mean? It means that there is no longer a barrier between us and God. We can now  come to God on our own in relationship with Him.

Matthew 27:50-51 (TNIV)
50 And when Jesus had cried out again in a loud voice, he gave up his spirit. 51 At that moment the curtain of the temple was torn in two from top to bottom…. 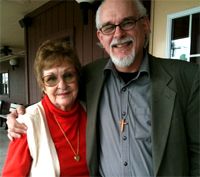 My mother passed away years ago. It was sudden. I grieve and I have shed many tears…there are moments that “the quiet” just plain set’s in! BUT, WOOOOOOOOOO! She’s rejoicing in heaven with Jesus in a way that we can only imagine! In heaven, she is now living the hope that we and she had for an eternity in Christ!   A month after her passing, my fourth grandchild, my fourth grandson, Rhys, was born! I believe with all of my heart that this is Jesus letting me know..”don’t worry, I am with you always. I am preparing a place for you that is more glorious that you can imagine”

This all started with the birth of a son…..the birth of Jesus and the testimony of the Magi. We are a part of God’s story!

Matthew 2:1-2 (TNIV)
1 After Jesus was born in Bethlehem in Judea, during the time of King Herod, Magi from the east came to Jerusalem 2 and asked, “Where is the one who has been born king of the Jews? We saw his star when it rose and have come to worship him.”

I will leave you today with this thought and question: Unlike much popular thought, the Magi did not arrive when Jesus was first born. They arrived over a year later. What are the top five reasons it took the Magi over a year to arrive in Bethlehem? 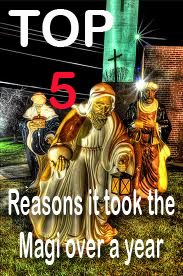 5. They got stuck in the drive-thru at Pharoh Burger.

4. The waited to long on Curly, the fourth wise guy.

3. They wanted to fashionably late.

2. Gaspar (one of the wise men) had hay fever, so they wanted Jesus to be out of the manger.

1. They didn’t want to get caught in the Christmas rush.

Have a very Merry Christmas filled with the joy of the birth of our Savior! Don’t take away anyone’s blessing. Live……. BE THE BLESSING and BE a part of God’s story!