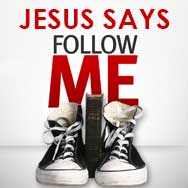 Jesus was a rabbi, unlike any other rabbi. Other rabbi’s separated themselves from the world, from sinners, in order to remain undefiled. Jesus did not separate Himself from  the world…..He lived among the people!

I always found it curious that when Jesus called His disciples, He simply said, “follow me”, and the scriptures tell us that indeed, they immediately interrupted their life and followed Jesus.

We have a saying that I have heard very often, “Jesus doesn’t call the qualified….he qualifies the called”. Is there something stirring in your heart? Do you feel like Jesus is calling you to a closer relationship?

Mark 2:13-14 (TNIV)
13 Once again Jesus went out beside the lake. A large crowd came to him, and he began to teach them. 14 As he walked along, he saw Levi son of Alphaeus sitting at the tax collector’s booth. “Follow me,” Jesus told him, and Levi got up and followed him.

Levi (also known as Matthew, the writer of the first Gospel) was a man that was despised by the religious authorities, excommunicated from the synagogue and someone who shamed his family and friends. He was considered a sinner because he was a tax collector. Tax collectors in ancient days were expected to take a commission on the taxes they collected….and most of them overcharged and kept the profits. They were hated by most Jews because of their reputation for cheating and because of their support of Rome.

HERE IS MY POINT: Jesus calls you, He calls me, to follow Him despite what is in our past, despite what we have done, despite the mistakes we have made in life and despite the fact that we may feel like we missed the boat on being good. He may be calling you to follow Him in relationship or maybe even into ministry. But the key is this….He calls you AS YOU ARE and where you are ……with no expectation of where you have been. Jesus doesn’t always call the qualified, those who have consistently made good choices in their lives…..He calls the broken, the hurting, and those of us, indeed all of us who need a relationship with Him. THERE ARE NO QUALIFICATIONS other than a willingness to simply be with Him. 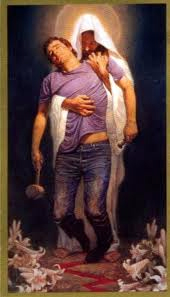 When I felt called by Jesus into a relationship (around 1986), I felt like I had missed the boat….my life had been full of addiction, drinking, bars, sex, and just plain junk! In fact, spiritually, I often felt, “why try to be good? God can’t love someone like me!” In 2003 I felt a deeper calling…..I felt Jesus was calling me into a life of service and sacrifice for him in ministry. Indeed, I remember many times sitting in tears talking to my wife just trying to figure out why and how Jesus would call me when I had so badly messed up earlier in my life.

I realized as I read about the Apostle Paul (a killer and persecutor of Christians), that indeed, Jesus doesn’t always call the qualified….he qualifies the called! I have been in His classroom ever since, listening to and applying His wisdom, sometimes stubbornly, to my life. Now I simply want to be covered in the dust of His sandals as I follow Him! I have the Greek word, “diakanos”, meaning “servant” tattooed on my wrist to remind me that I am a servant to Jesus and to others.

Mark 9:35 (TNIV)
Sitting down, Jesus called the Twelve and said, “Anyone who wants to be first must be the very last, and the servant of all.”

Do you want true fulfillment and joy in life? No matter what the situation, at work, in school, among friends, among family……..IN YOUR MARRIAGE…….follow Jesus, live in His classroom, tattoo “diakanos” on your heart and serve those around you in whatever capacity that might be….and you may find that in seeking to serve you become first, fulfilled and living a life of joy. I know that this is what I found!

About the Author
God wants humanity encountered by Him, through us. We are all a part of God's story.....let's not lose that.
Social Share
One Comment