Sermon on the Mount: Only Love Stops Hate

by admin
difficulties, Love, Sermon on the Mount
3 Comments 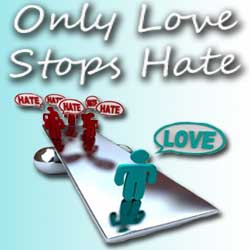 This woman stopped at a red light and her car dies. She frantically turns the key over and over trying to get the car started. The light turns green and the car simply won’t turn over. A man in the car behind get’s angry and starts laying on the horn. Of course her blood begins to boil at the loud incessant honking. Finally she get’s out of car and walks back to the talk to that man laying hard on his horn, “I can’t seem to get my car started,” she said to him, smiling. “Would you be a sweetheart and go and see if you can get it started for me? I’ll stay here in your car and lean on your horn for you.”

Whenever Jesus says, “You have heard that it was said”, we know that we are in for something deep and profound. In fact, we know that Jesus is getting ready to set the world thinking on its ears!

Matthew 5:43-44 (NIV)
43 “You have heard that it was said, ‘Love your neighbor and hate your enemy.’ 44 But I tell you, love your enemies and pray for those who persecute you, 45 that you may be children of your Father in heaven. He causes his sun to rise on the evil and the good, and sends rain on the righteous and the unrighteous.

First a little context. What was happening at the time Jesus uttered these words that would give meaning to the listener? When Jesus says, “You have heard that it was said”, he is referring to Leviticus 19:18.

Leviticus 19:18 (NIV)
Do not seek revenge or bear a grudge against anyone among your people, but love your neighbor as yourself. I am the LORD.

At that time, the Pharisees, the Jewish religious leaders of the interpreted a “neighbor” as someone of the same ethnicity and faith. They believed that the only people you should love are those who love you in return.

What Jesus is saying here is, “You guys got it wrong! Not only should you love those who love you, but you love those who don’t like you.” In Luke 10:29, Jesus is flat out asked, “And who is my neighbor?”. Jesus replies with the Parable of the good Samaritan. Let me bring this parable up to date to attempt at eliciting the same response in you as the readers hearing this heard.

In reply Jesus said: “A man was going down from New York to New Jersey, when he was attacked by robbers. They stripped him of his clothes, beat him and went away, leaving him half dead. A priest happened to be going down the same road, and when he saw the man, he passed by on the other side. So too, a pastor, when he came to the place and saw him, passed by on the other side. But a Islamist, as he traveled, came where the man was; and when he saw him, he took pity on him. He went to him and bandaged his wounds, pouring on oil and wine. Then he put the man in his own car, brought him to a Holiday Inn and took care of him. The next day he took out his debit card and gave it to the front desk manager. ‘Look after him,’ he said, ‘and when I return, I will reimburse you for any extra expense you may have.’

“Which of these three do you think was a neighbor to the man who fell into the hands of robbers?” The expert in the law replied, “The one who had mercy on him.” Jesus told him, “Go and do likewise.”

Jesus explains that we must show love to all kinds of people—no matter what faith, nationality, or personality—enemies included.

Here is the key: Do you trust Jesus enough to love those, indeed to take action, and pray for those who you would consider in some way or another your enemy. Maybe it’s a family member who speaks ill will of you or an ex, or a coworker? Maybe it’s a political figure, a pundit or a group of people (a certain nationality, race or someone like an abortionist, murderer, or rapist).

First, we are not, I believe, to pray for God to bless someone in their sin, however, we ARE to pray that they too would follow Jesus in wisdom and repent of their sin. Truth is, like many things we are called to do in following Jesus, these things are not easy. We must ask God daily to give us strength and to forgive, to love and to rid ourselves of hateful feelings.

I would point out that in Greek, there are three major words translated as love, “Phileo” (a friendship type of love), “eros“, a physical, romantic type of love and…….”agape“, a self sacrificing, deep love eliciting good will and benevolence. Jesus says, “But I tell you, love [agape] your enemies and pray for those who persecute you.”

Okay, at this point you are saying….”This is impossible! It won’t work! It’s not right!”.

I heard it best said this way, “So it doesn’t mean that we have to love our enemies the same way that we speak about “falling in love” with someone or the way we love our family members. It simply means we must open our hearts to them. And pray for them, too. In my experience, it’s easier to agape someone you dislike (or who dislikes you) when you pray for them. Because when you pray for them, God often opens your heart to seeing people the way that God sees them, rather than the way you see them. And you can often have pity for people who may be filled with anger toward you.”

Yes….still….it is hard. Pray, ask God for help. Ask God for strength. The truth is….when we APPLY the wisdom of Jesus, our lives are changed and impacted in a blessed way. Remember, God loves you and has forgiven you.

About the Author
God wants humanity encountered by Him, through us. We are all a part of God's story.....let's not lose that.
Social Share
3 Comments