Sermon on the Mount: The Second Mile 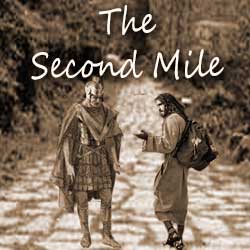 Again, I find this wisdom of Jesus amazing…the truth-upside down! Jesus tells us next in Matthew 5:41 “If anyone forces you to go one mile, go with them two miles.” Yeah, right! The first way to deal with cruelty is retaliation, the second is passivity….but Jesus shows a THIRD WAY…a way that involves strength of character and asserts our dignity….let’s look closer…..

First, let’s look at a little context here. As the people hearing Jesus speak here would understand, Jesus is talking about the common practice of the Roman Army–the conquering army–to make their subjects carry their “pack” as they moved from place to place.

And the interesting thing is that in their army there are rules to their cruelty! They can only command you to go one mile because farther was considered cruel. Go figure! As you are conquering and killing people whatever you do–don’t be TO cruel! 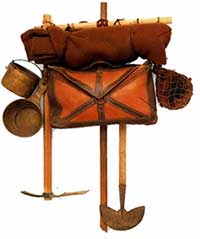 So there were these rules that were enforced by the generals and the leaders underneath them about what you could and couldn’t command a “conquered” people to do. By law, this powerful soldier can make you carry his load one mile. But Jesus says, go ahead and carry it a second mile. Ahhhh, but what does this do…..look close….if the soldier allows this he is breaking his own military protocol and obviously doesn’t want this to be seen by his superiors. He could get into trouble!

Who’s got the power now? And is this power rooted in coercion and violence? NO. The power is rooted in his generosity! It’s like the ultimate judo move–“Here, take that my friend!”

You now have this powerful soldier following this poor peasant saying <imagine a whiny voice>, “please stop, please stop”. Okay, maybe it wasn’t quite like that.

But again, as Jesus is telling this to the crowds, they have to be saying, “WOW! What genius! This is amazing!” This man’s generosity has exposed the cruelty of the Roman soldier.

The Third way is to rise above the oppressor (whether it be a boss, a co-worker, an enemy, a family member…you get the picture) and to go the second mile in love exposing their attitude for all to see. Though, I would say, your intention is not to expose their attitude to others, but rather to themselves.