Sermon on the Mount: “Hello, My Name is Jesus”

by admin
kingdom of heaven, Sermon on the Mount
0 Comment

Does Jesus have to put on a “Hello my name is Jesus” name tag so that we know he is right here with us? At the very beginning of Jesus’ ministry here on earth, He tells us that the kingdom of heaven is NEAR. Is that NEAR as in TIME, or NEAR as in Proximity? I believe that it is both! Jesus tells us how to be a part of His kingdom. But–imagine people missing the ways of God when they are so close. Truth is, in the crowd of our lives….Jesus is right here!

I think this happens often because they are focusing only on Heaven after they die. It’s almost sad sometimes. Jesus’ message about the kingdom is not just something to be read and heard but it is something to be SEEN–in human lives and hearts!

Matthew 4:12-17 (TNIV)
12 When Jesus heard that John had been put in prison, he returned to Galilee 13 Leaving Nazareth,  he went and lived in Capernaum (which was by the lake in the area of Zebulun and Naphtali) 14 to fulfill what was said through the prophet Isaiah: 15 “Land of Zebulun and land of Naphtali, the way to the sea along the Jordan, Galilee of the Gentiles 16 the people living in darkness have seen a great light on those living in the land of the shadow of death a light has dawned.” 17 From that time on Jesus began to preach, “Repent, for the kingdom of heaven is near.”

And then, as I studied I found the key Scriptures to understanding the SCOPE of this kingdom. Listen to the Gospel of Luke, chapter 17, verses 20 and 21: 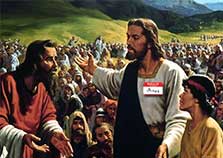 Think of this–the kingdom of God can be found through your heart–it‘s within or among you. Now Jesus tells us that it is NEAR.

May you recognize that the kingdom of heaven is as near as your relationship with Jesus. May you see his name tag in the crowd of your life and may you live each day with Him reigning as king in your life. Indeed, may you love with a heart like Jesus!