Sermon on the Mount: Now and Forever

by admin
kingdom of heaven, Sermon on the Mount
1 Comment 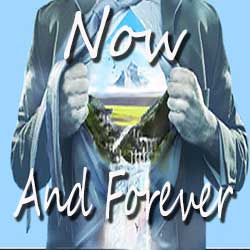 First, let’s look at the picture that comes to your mind when I say “kingdom of heaven”–what do you see? What pictures come to mind? Golden streets, no Suffering, eternal peace, volume’s of clouds, and old man (Peter) standing at a heavenly gate with keys in his hands allowing only certain people in? 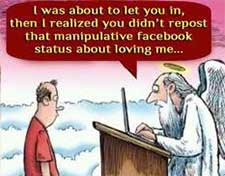 I don’t want to totally destroy that picture–the PLACE we’ve been taught–called HEAVEN………but Jesus teaches that it is MUCH more than just a place that we go when we die.

The principal theme, the primary teaching, especially in the synoptic Gospels (Matthew, Mark and Luke) within Jesus’ message was AND IS: “The kingdom of heaven / The kingdom of God”.

There is no instance  that I can find in the Old Testament Scriptures of either of these two phrases. However, the thought of a COMING TIME when God would rule as King is throughout the old Testament and ancient Jewish writings.

As I have studied and looked closely at the Scriptures and at what Jesus was telling us, I realized that I had been MISSING THE KEY to Jesus teaching most my life. I had it about right, but I was missing so much! 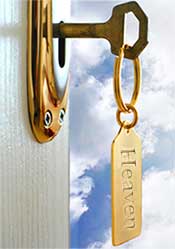 The Kingdom of Heaven is not JUST a place where saved souls go after death or a place of post mortem bliss–it’s MUCH, MUCH, MORE!

Let me see if I can illustrate this: I was very much like a child sitting down to the dinner table with his plate of food and on the other end of the table is a chocolate cake. This child is going to have a rough time eating his dinner when his eyes are always on that cake. I was like that in a similar way! I had a tough time seeing the kingdom in my midst because I could only see it at the end of the table.

Let me explain further: If we are not careful, we’ll place too much focus on the picture of the eternal place called heaven–in our future–and not see it in our midst right here and right now!

Tomorrow, I will start to bring into focus the Scriptures and teachings of Jesus about this kingdom of heaven. Before we end today, let me say that there is an eternity with God called heaven. It’s just that there is so much more to heaven than we have often been taught. We can’t ignore Jesus’ teachings on this. We’ll start the journey tomorrow. By the way, as I studied Jesus’ teachings…I discovered that this is actually not anything new. Theologians have discovered the same thing over the centuries.

About the Author
God wants humanity encountered by Him, through us. We are all a part of God's story.....let's not lose that.
Social Share
One Comment