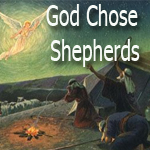 In a few days the greatest event that has rocked this world occurred–Jesus, our Savior and Messiah, was born. Of special note today, is that of all the people that announced His birth, a birth that had been anticipated for literally centuries and centuries, it was a group of shepherds that were visited by angels…..not the powerful, not kings, not the religious authorities of the day.

God chose shepherds. Among the occupations, shepherding were pretty low on the totem pole when it came to prestige. They were often outcasts, not allowed in the city and not trusted by the general public, for often they were thieves. Shepherds were despised by “good people”.

They were often unable to keep the details of the ceremonial law; they could not observe all the many hand washing’s and rules and regulations. Their flocks made constant demands on them; and so the religious authorities and the people often looked down on them. It was to simple men of the fields that God’s message first came.

Here is what is important for us to understand: “The good news about Jesus is that he comes to all types of people, including the plain, the ordinary, and the outcasts of society. He comes to anyone with a heart humble enough to accept him. Whoever you are, whatever you do, you can have Jesus in your life. Don’t think that you need extraordinary qualifications–Jesus accepts you as you are.” (1)

Luke 2:8-14 (TNIV)
8 And there were shepherds living out in the fields nearby, keeping watch over their flocks at night. 9 An angel of the Lord appeared to them, and the glory of the Lord shone around them, and they were terrified. 10 But the angel said to them, “Do not be afraid. I bring you good news of great joy that will be for all the people. 11 Today in the town of David a Savior has been born to you; he is the Messiah, the Lord. 12 This will be a sign to you: You will find a baby wrapped in cloths and lying in a manger.” 13 Suddenly a great company of the heavenly host appeared with the angel, praising God and saying, 14 “Glory to God in the highest heaven, and on earth peace to those on whom his favor rests.”

May you realize that Jesus accepts you and wants you to come to Him as you are. May His heart join your heart……and may you find the blessedness of living a life in relationship with our Savior, our Messiah and our creator.