TEMPTATION: Let’s sum all this up. We will never triumph over temptation by pretending it doesn’t exist. We can’t afford the luxury of thinking it can’t happen to us, no matter who we are. We need to guard against the temptation of putting our trust in worldly things for our fulfillment and happiness rather than God.

We need to guard against the temptation of anything that causes addiction which always leads to a path of destruction. These pleasures will solve our problems.

God is not a cosmic vending machine. The answers are there and God will give you strength when you ask. God’s wisdom is available to us, all we have to do is apply it. 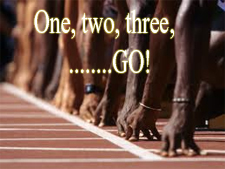 — SECOND…be industrious and follow God’s direction–in solving our own troubles.

— THIRD….be honest and righteous in applying these things. God can only bless that which is right, not that which is done dishonestly or immorally.

Recognize the provision in your life and don’t sit around grumbling because you want more.

Recognize that Satan, the great deceiver, WILL tempt you with lies that will take you down the wrong path!

Be constantly hopeful because temptation can be defeated! God will not allow us to suffer any temptation we cannot bear and He will provide a way of escape we just need to take it! Are you ready to fight those nasty old temptations? Ready……one, two, three……..GO!

1 Corinthians 10:1-13 (TNIV)
1 For I do not want you to be ignorant of the fact, brothers and sisters, that our ancestors were all under the cloud and that they all passed through the sea. 2 They were all baptized into Moses in the cloud and in the sea. 3 They all ate the same spiritual food 4 and drank the same spiritual drink; for they drank from the spiritual rock that accompanied them, and that rock was Christ. 5 Nevertheless, God was not pleased with most of them; their bodies were scattered in the wilderness. 6 Now these things occurred as examples to keep us from setting our hearts on evil things as they did.

11 These things happened to them as examples and were written down as warnings for us, on whom the culmination of the ages has come. 12 So, if you think you are standing firm, be careful that you don’t fall! 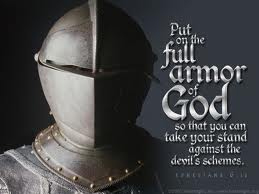 13 No temptation has overtaken you except what is common to us all. And God is faithful; he will not let you be tempted beyond what you can bear. But when you are tempted, he will also provide a way out so that you can endure it.

May you face temptation wearing the armor of God and wielding the tools of God. May you defeat the great deceiver, Satan, daily and grow stronger in Christ every moment of the day!