Now let’s talk about fighting temptation. How can we do this and come out victors? How can we resist the lies of Satan…the lies that take us down that wrong path?  First, we must constantly recognize that the great deceiver will do exactly that….he will deceive us with temptation!

1 Corinthians 10:11-13 (TNIV)
11 These things happened to them as examples and were written down as warnings for us, on whom the culmination of the ages has come. 12 So, if you think you are standing firm, be careful that you don’t fall! 13 No temptation has overtaken you except what is common to us all. And God is faithful; he will not let you be tempted beyond what you can bear. But when you are tempted, he will also provide a way out so that you can endure it.

Temptation will come. It shouldn’t catch us by surprise, but it often does. We often think we have conquered something and we let our guard down.   There are medicines that take care of the effects but do no actual healing: medicines for herpes, medicines for psychological problems. When we take these medicines, we start to feel normal and fine. When we let our guard down and think that we are now okay and stop taking the medicine, the condition rears its head with a furry.   Following Jesus (not just simple belief) is our medicine. We must constantly be on guard against temptation so that it doesn’t rear its head with that furry!

It is important to realize that temptations will come and they are not in themselves sins. If they were, then Jesus would have been a sinner because He was tempted as we are. However, we need to know that the time of temptation is especially the time to be on our guard. 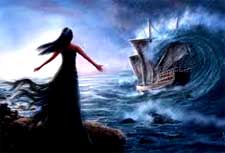 Martin Luther said, “You can’t keep the birds from flying overhead, but you can keep them from building a nest in your hair.”   In ancient mythology there were tales of the “sirens’ call”. They were beautiful sea maidens who enticed ships to sail close by singing a beautiful song. The ship would then wreck on the rocks. So many people have been lured to ruin, lured to some type of bondage, by what at first seemed beautiful. We have to always be on guard to temptation so that we are not lured to ruin!