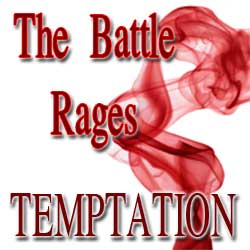 Yesterday I mentioned that we live in a world in which there is a spiritual battle. Satan and his minions are in a battle to deceive us, lead us astray, lead us away from God and if we aren’t careful, we will fall for his schemes. We are TEMPTED daily to do the wrong things. Often, very often, we are even convinced that we are doing the right thing. This is what happend when we follow worldly wisdom as opposed to God’s wisdom.

What is temptation? Temptation is actually part of a crafty plan set in motion by the great deceiver, Satan, that appeals to our natural desires in an attempt to seperate us from God. It’s an invitation to live a self-serving life and feeds off our own tendancy toward self-reliance. 1 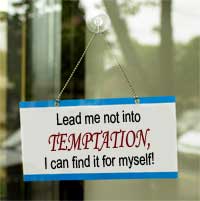 A man had a sign on his door that said, “Lead me not into temptation, I can find it for myself.” We can all make that statement, can’t we? Temptation is something we deal with on a daily basis. The Apostle Paul had some very good advice concerning temptation that he gave to the church at Corinth.

We can learn how to gain victory over the temptations in our lives. Paul’s advice consists of warnings drawn from the history of the children of Israel. These were the people that God choose to carry His message of redemption into the world in the beginning. These were the people that were led out of their bondage in Egypt to the promised land. These events are so ancient that they may seem abstract and foreign to us, but they speak a universal truth that is very applicable today. Even though the Israelites lived in close fellowship with God, they found themselves tempted and….they yielded to those temptations. It took 40 years for them to reach that promised land.

So, Let’s go on a scouting report, let’s see what temptation is and how it can be defeated. Why did it take so long for God’s people to reach that Promised Land? After all, it doesn’t take 40 years to simply walk from Egypt to what is now Israel. In our lives, what is keeping us from living in that kingdom and why does it sometimes take so long to get there?

Let’s start to answer these questions by look at and “facing” temptation. We’ll start with the temptations that God’s people, the Israelites faced….many of the same temptations that we face. Let’s read the Scriptures first. I have placed some commentary on each section of Scripture in brackets

1 Corinthians 10:1-10 (TNIV, the apostle Paul is speaking)
1 For I do not want you to be ignorant of the fact, brothers and sisters, that our ancestors were all under the cloud and that they all passed through the sea. 2 They were all baptized into Moses in the cloud and in the sea.

[To the ancient Israelites, “the cloud” was a way of saying they were under God’s protection and it served as a guide to follow….”the sea” was the Red Sea that they passed through on their way out of bondage. As Christians, aren’t we under God’s protection? Is His Word our guide to follow? On OUR way out of the bondage of this world, have we not been baptized in water and into the Spirit?]

[This was a way of saying that they all followed the same God and the same spiritual laws. What Paul is doing is pointing out that ancient Hebrews are like us, they were God’s people and had the same opportunity to be in relationship with God, with Jesus, that we ourselves do.]

5 Nevertheless, God was not pleased with most of them; their bodies were scattered in the wilderness.

[When Moses led them out of bondage, they were in the desert, wandering—–their destination, the promised land. Have you felt in your life like you are wandering through a desert full of pitfalls and danger and you simply want to get to the “promised land”?]

troubles rather than realize that they had only to put their full faith and trust in God who led them out of bondage in Egypt. When you wonder about the destroying angel mentioned above, remember that Satan himself was a fallen angel]

Every day we face the temptation to do things we know we shouldn’t do…..things that often bring short term pleasure but that can bring longer term pain. In the coming days we will look closer at these temptations to understand as well what can be done to resist them and to fight temptation.

About the Author
God wants humanity encountered by Him, through us. We are all a part of God's story.....let's not lose that.
Social Share
6 Comments