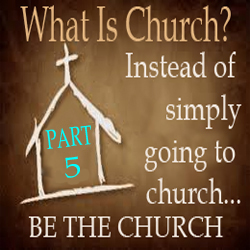 One of the hardest things I sometimes find to articulate is being a part of something that is “bigger than ourselves” (because GOD and His kingdom is certainly so much “bigger than ourselves”.) Church is a community of people that are outward focused, concerned with the “Big C”. I like to call this “kingdom focused”. I believe that “church” is simply a small community of followers and believers that are a part of, and make decisions, based on God’s larger kingdom rather than simply our “small community”. I believe deeply that God will take care of the little “c” if we stay focused on the big “C”.

My friend, Father Ryan told me once,

“One thing that has frustrated me with the churches (or denominations) of the Church is that most all of them think they’ve got a corner on the market.  It seems to me that if the Bible says that it doesn’t record all the goings

and doings of Jesus in the Gospels and that the angels circling the throne of God as depicted in Revelation never cease to praise God because they’re always seeing wondrous things about Him how can one denomination claim to have it all?

I used to see denominations as a bad thing, a rather divisive thing.  However now I see them as Paul says that everyone has a psalm, hymn, spiritual song, word of encouragement, etc.  Everyone has something to contribute; whether it’s the emphasis of the Scriptures found in the Evangelical camps, or the majesty of the liturgy found in the Orthodox and Catholic traditions, or the dependence on the Holy Spirit found in the charismatic and Pentecostal traditions.  The key then becomes our willingness to accept and unite ourselves to those of different families within the Family. If churches can’t work together to produce and promote the Church then what’s the point?”

My friend Jim Smallish cautioned that we should be cautious regarding overly harsh of judgment on individual churches, and individual members. He added that ,

“Statements like, ‘..most all of them think they’ve got a corner on the market ‘ , and ‘ ..their own little empires’, and so on are, at best, counterproductive, and patently untrue, and at worst, harsh and judgmental, as well as mean-spirited in and of themselves. “ 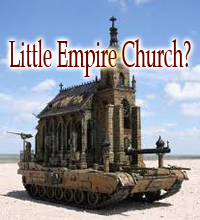 I certainly agree with Jim. I assured him that we were not standing in judgement of other churches. At least not intentionally judging them. However we are attempting to have a discussion about what  a good church “is”. I have been a part of a church before that WAS protective of their “little empire”. In many ways it seemed that way. I was a deacon….much of our time was spent arguing over whether the congregation could clap after the choir sang a song. Outsiders were barely welcome….relationships were few…the church was dying, the passion for Christ was barely discernable. But, the status quo was upheld and everyone was comfortable. My intention is not to condemn, but to see as an example what we all must always guard ourselves against becoming. I agree very much that by in large, most churches do not feel like they have a corner on the market, yet there are some that do.

“That is not to say that I do not think that inward focus is not a problem in the church at large..it is, as a product of the human condition of the members of the church..kind of goes back to your reflections on diversity in the congregations. This seems to be an ongoing problem in the church. Those who are true devotees of and to the Kingdom of God are often those who carry much of the load, and struggle to find ways to get through to, enkindle, lead and or drag others who may, sadly, be content with something less than a deep and genuine faith.”

I believe that he is very right. Each and every one of us is susceptible to that same human condition. This is something that we must always guard against. That is the essence of what this discussion is about.

Jim also had some great insight concerning the missional aspects of serving the community. He shared a second caution,

“the activity [serving the community missionally] in and of itself does not necessarily mean inward change. People may “support” a mission or ministry which is directed outside the local community for many reasons including self-glorification,etc, without “getting it” ..this is the second part of “faith without action is dead; action without faith is worse, it’s pointless” We read in scripture..”Without faith it is impossible to please Him(God).”

Again, I have to agree strongly with Jim’s thoughts. He makes a point that bears strong discussion: “The legalism of reaching out.” If we reach out to others for self glorification or just to be able to say we did it. What we are doing is practically pointless. My hope is to be able to lead people to the door, the door that is always open, the door from which emanates God’s mighty glory. My hope is to see peoples hearts changed to want to “follow” Jesus, through the dust, through the muck, through beauteous fields and through the clouds.

So again, I would be interested in your thoughts.

Tell me what you think….