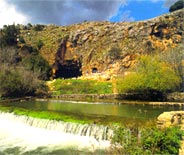 Jesus tells us that He will build His church (assemblies of people who gather in His name) and gives the apostle Peter the authority by Jesus to interpret and make judgments about what would be permitted or forbidden in the church, the body of believers.  It’s been a long journey looking at “The Kingdom of Heaven/The Kingdom of God”, and we’re not even half way there. Join me as we look at the very begining moment of what we call, “The Church”……First, let’s look at this Scripture in context, let’s look at the Gospel of Matthew, chapter 16, verses 13-20:

Artist rendering of the temple complex at Caesarea Philippi

13 When Jesus came to the region of Caesarea Philippi, he asked his disciples, “Who do people say the Son of Man is?” 14 They replied, “Some say John the Baptist; others say Elijah; and still others, Jeremiah or one of the prophets.” 15 “But what about you?” he asked. “Who do you say I am?” 16 Simon Peter answered, “You are the Messiah, the Son of the living God.”

17 Jesus replied, “Blessed are you, Simon son of Jonah, for this was not revealed to you by flesh and blood, but by my Father in heaven. 18 And I tell you that you are Peter, and on this rock I will build my church, and the gates of death will not overcome it. 19 I will give you the keys of the kingdom of heaven; whatever you bind on earth will be bound in heaven, and whatever you loose on earth will be loosed in heaven.”  20 Then he ordered his disciples not to tell anyone that he was the Messiah.[emphasis added]

First I would point out here that Jesus uses the term “Son of Man” to refer to himself, and then clearly, when Peter answered, affirmed the truth that He was the Christ, the Son of the Living God. In that day the common view was that Jesus was one of the prophets come back to life. If we look at Deuteronomy 18:18, we see one of the key Scriptures which speaks of the coming Messiah .

So, let’s look briefly at each prophet in verse 14 here:
— Herod thought that Jesus was John the Baptist come back to life, so apparently the rumor had been going around.
— Elijah never actually died but was swept up to heaven in a chariot of fire (2 Kings 2:11-12). You can see how the disciples may have thought that he was Elijah come back on earth.
–Now the thought of Jeremiah enters the picture………….Jeremiah may have been considered because his death is not mentioned in Scripture. According to Jewish legend, he was “immortal”, so, like Elijah, he never died but was taken to heaven.

However, none of these is correct. I find it interesting that Jesus (God) knows who to ask……Peter….and Peter proclaims that Jesus is “the Christ, the Son of the living God”!

I believe that this is an important point here: Jesus is the Christ, the Messiah, the Son of the Living God. He is not just a prophet with wise sayings and beliefs, I believe that Jesus is the truth, as God is the truth, the light in a dark world. Jesus tells Peter that He is correct and that only God could have revealed this to him. Where Jesus is recognized as Lord and Savior, faith grows and the Gospel prospers.

Here we come upon something I find interesting. In the Gospels, the Greek word, “ekklesia” is mentioned only in Matthew. I would note here that the word “ekklesia” at this time in history simply meant “an assembly”, or “a gathering”, not necessarily of Christians, as there were no real “Christians” yet. However, look at what Jesus says: “I will build my church” [emphasis added]. Jesus is clearly stating that people will assemble in His name.

And then Jesus mentions that “the gates of  death  will not overcome”  the church. What does Jesus mean by these words? The Greek “Hades” in the Old Testament and ancient Jewish tradition simply means the “place of the departed souls”, the “realm of the dead”. Christ promises that not even death can take away those that belong to Christ.

And now we come to the object of our current lesson: “I will give you the keys of the kingdom of heaven; whatever you bind on earth will be bound in heaven, and whatever you loose on earth will be loosed in heaven.”    Note that Jesus uses the future tense (“will give ….will be bound …will be loosed” ). Here I find it best explained in the Life Application Bible Commentary:

The “binding and loosing” aspect of authority applied to all the disciples (Matthew 18:18), not just to Peter. However, Jesus gave Peter undeniable authority over the group of disciples, seen in the leadership he assumed over the Jerusalem believers (Acts 1:15-26) and over the church after Pentecost.

Some say the “keys of the kingdom” represents the authority to carry out church discipline, legislation, and administration (Matthew 18:15-18); others say the keys give the authority to announce the forgiveness of sins (John 20:23). Most likely, the “keys” are the kingdom authority given to the church, including the opportunity to bring people to the kingdom of heaven by presenting them with the message of salvation found in God’s Word (Acts 15:7-9). They are also the keys to binding and loosing (Matthew 18:18-20).

I would also note that “binding and loosing” were terms regularly used for rabbis’ legislative authority in interpreting Scripture . Peter has been given this authority by Jesus.

Lastly, Jesus instructs the disciples not to reveal this truth, that He is the Messiah, the Christ.

Today’s CLUE: Jesus tells us that He will build His church (assemblies of people who gather in His name) and gives the apostle Peter the authority by Jesus to interpret and make judgments about what would be permitted or forbidden in the church, the body of believers.

What do you think?