The Kingdom of Heaven: Matthew 8:11, “The Faith of the Centurian” 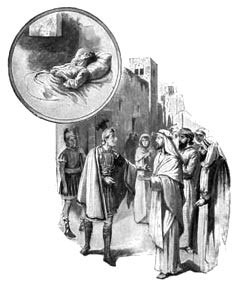 The next place that Jesus teaches and mentions the kingdom of heaven/kingdom of God is in the Gospel of Matthew 8:11. He also speaks of the kingdom in a parallel verses in the Gospel of Luke 13:28-29. This again is a clue that the two kingdom phrases are synonymous. We will look at this closer later, right now let’s look at the Gospel of Matthew, chapter 8, verse 11 in context, we will look at verses 5 through 13 as Jesus tells us about the faith of the Roman centurion:

Mathew 8:5-13:
5 When Jesus had entered Capernaum, a centurion came to him, asking for help. 6 “Lord,” he said, “my servant lies at home paralyzed and in terrible suffering.” 7 Jesus said to him, “I will go and heal him.” 8 The centurion replied, “Lord, I do not deserve to have you come under my roof. But just say the word, and my servant will be healed. 9 For I myself am a man under authority, with soldiers under me. I tell this one, ‘Go,’ and he goes; and that one, ‘Come,’ and  he comes. I say to my servant, ‘Do this,’ and he does it.” 10 When Jesus heard this, he was astonished and said to those following him, “I tell you the truth, I have not found anyone in Israel with such great faith.

11 I say to you that many will come from the east and the west, and will take their places at the feast with Abraham, Isaac and Jacob in the kingdom of heaven. 12 But the subjects of the kingdom will be thrown outside, into the darkness, where there will be weeping and gnashing of teeth.” 13 Then Jesus said to the centurion, “Go! It will be done just as you believed it would.” And his servant was healed at that very hour. (emphasis added)

This story of Jesus healing the Roman centurion’s servant seems easy enough to understand. However, I found the richness in meaning all that much stronger when I understood some of the background. I think so very often that it is important to understand the culture of the times to fully understand what Jesus was saying. It is also important to look at this same story related by Luke the Physician and disciple of Paul in the Gospel of Luke, chapter 7, verses 1 through 10:

Luke 7:1-10
1 When Jesus had finished saying all this in the hearing of the people, he entered Capernaum. 2 There a centurion’s servant, whom his master valued highly, was sick and about to die. 3 The centurion heard of Jesus and sent some elders of the Jews to him, asking him to come and heal his servant. 4 When they came to Jesus, they pleaded earnestly with him, “This man deserves to have you do this, 5 because he loves our nation and has built our synagogue.” 6 So Jesus went with them. He was not far from the house when the centurion sent friends to say to him: “Lord, don’t trouble yourself, for I do not deserve to have you come under my roof. 7 That is why I did not even consider myself worthy to come to you. But say the word, and my servant will be healed. 8 For I myself am a man under authority, with soldiers under me. I tell this one, ‘Go,’ and he goes; and that one, ‘Come,’ and he comes. I say to my servant, ‘Do this,’ and he does it.” 9 When Jesus heard this, he was amazed at him, and turning to the crowd following him, he said, “I tell you, I have not found such great faith even in Israel.” 10 Then the men who had been sent returned to the house and found the servant well.

As most of you probably know, a centurion was a Roman military officer. Also, the Gospel of Matthew was written for a Jewish audience, hence Matthew emphasizes the centurion’s race and faith. While the Gospel of Luke, himself a Gentile, was written for a Gentile audience. In fact, this Gospel was addressed to Theophilus, possibly a non-Christian Roman official, but definitely a person of high position and wealth. I would note that in New Testament times, dealing with a person’s messenger was considered the same as dealing with the person himself.

Generally, the Jews hated Roman soldiers and the Roman soldiers hated the Jews. However, in this instance, this centurion must have been a known “God-fearer”, who worship the God of Israel but was uncircumcised. Note that the centurion, a Roman officer, addresses Jesus as “Lord”. He must have known that Jesus could heal and showed respect for Jesus’ authority in this area of healing.

Another interesting thing I would want to point out is that the centurion is not asking for help for himself, but for a servant. Josephus, the Jewish historian, noted in his writings about the history of the Jews, that Roman soldiers often had many servants who trained and fought with them.

Look how strong the faith of this centurion is in Jesus. The centurion had absolutely no doubt that Jesus could merely speak the word and heal his servant. He doesn’t even have to be there or see the servant! This Gentiles faith astonished Jesus! Why, because the centurion grasped the principal of authority that he learned from his own experience as a military leader.

Okay, now the meat of this story as it applies to the kingdom of heaven/kingdom of God: The Jews believed that the dispersed Jews (from the east and the west) would return to Jerusalem to join with the Messiah and the great patriarchs in a great banquet. The prophet Isaiah in the book of Isaiah 2:2-3 predicts that Gentiles will also return in the last days. The feast is the banquet of celebration in the kingdom of heaven. Few Jews understood that Gentiles would also take their places at the table. In fact, the Jews felt that their lineage guaranteed them a spot at the table. Jesus tells them that unbelieving “subjects of the kingdom” (referring to the Jews) instead of having assured seats at the banquet, would be thrown out into the darkness. “Weeping and gnashing of teeth” is a common Biblical description of Hell. As the Life Application Bible commentary puts it: “The point is that the central focus of God’s kingdom will not be only the Jewish race. Some Jews will not be included. Many religious Jews who should be in the kingdom will be excluded, however, because of their lack of faith. Entrenched in their religious traditions, they could not accept Jesus Christ and his new message. We must be careful not to become so set in our religious habits that we expect God to work only in specific ways. Don’t limit God by your mind-set and lack of faith.” (emphasis added)

At this, by Jesus Words, the centurion’s servant is healed.

Today’s CLUE: The phrase “kingdom of heaven” as used by Jesus does seem include the “place” – heaven – the place where saved souls go after death, or a place of post mortem bliss. However, Jesus let’s us know that just because a person is “religious” or is by birth a Jew, that this does not necessarily guarantee them a seat at the table. What DOES guarantee you admittance is your faith in Him.

ADDITIONAL NOTE: A friend once told me, “Another passage supporting  the proposition that belief in Jesus is not the only path to the ‘Kingdom'”.

My reply: Abraham, Isaac and Jacob did not confess faith in Jesus as they were in God’s kingdom under the old covenant. In fact, God Himself tells us in Jeremiah 31:31-33 of this covenant and a new covenant to come. In general, a covenant is a relationship based on committment which includes both promises and obligations. The covenants between God and the people are all covenants of divine favor or grace. They express God’s gracious committment and faithfullness, establishing a continuing relationship.  In the Old Testament covenant with God, the Abrahamic covenant (Deuteronomy 7:12) is an everlasting covenant and rest upon divine grace alone. The “seal” was the rite of circumcision (Genesis 17:11) . In the new Testament covenant made by God it is baptism. Understand, that circumcision, just as baptism, is a sign, not a legal condition of the relationship. The Apostle Paul tells us in his epistle to the Ephesians 2:11-22 of this new covenant and it is explained further by the apostle Paul in his epistle to the Galatians 3:6-18. I believe that faith in Jesus is necessary, Jesus explained and fulfilled the true meaning of the law, showing us that it was of the heart, not just regulations. A new covenant was established by God with all people in the person of Jesus Christ. Of course, you can choose to believe or not believe, that’s the beauty of God’s love, He loves us so much that he gives us the will to choose.